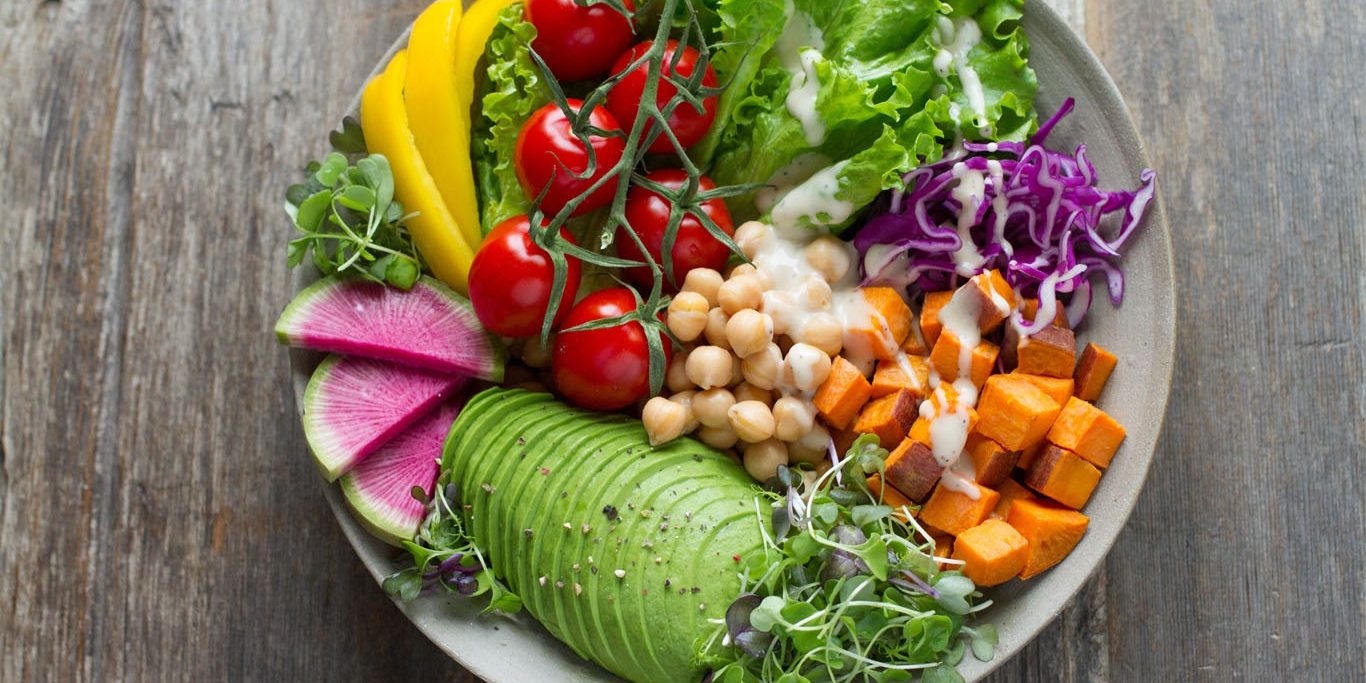 Whether it’s for concerns about the environment, animal welfare, or just wanting to try to be healthier, increasing numbers of people are choosing a diet that minimises animal produce or cuts it out entirely.

More recently, cutting out animal produce entirely is something that has been actively promoted by the charity Veganuary, which asks people to take a pledge to try veganism for one month.

But regardless of whether you choose to be vegan or plant-based (vegans avoid all animal-based products), if you are used to a ‘meat and two veg’ diet, making the switch can require a bit of thought and research. This is not to say that a diet that includes animal products is automatically healthier than a plant-based diet, but there are some nutrients that will need to be included either through fortified foods or supplements.

Fortunately, there is plenty of information freely available online, as well as a wide selection of recipes for inspiration, and it is possible to make some like-for-like switches.

Registered nutritional therapist Claire Hider, from Vital Spark Nutrition, has been vegan for several years and sees both vegan and non-vegan clients.

“Most of my clients are really positive that they’ve made the switch, and I see a lot of people who simply want a quick check to make sure their new diet is as nutritious as possible,” she says.

Hider says that for any client who is not eating animal protein, she would want to make sure that they know about good sources of plant-based protein such as nuts, pulses, beans and quinoa.

Protein
Protein is essential for growth and tissue repair, and is also a source of energy. For the human body, it is the compounds found in proteins (called amino acids) that are important. Whilst meat, eggs and dairy products each contain all the amino acids that we need, and so are considered ‘complete’ foods, plant sources do not — with the exception of quinoa, which is why this humble grain has become so popular over recent years.

Anyone on a plant-based diet can obtain all the amino acids they need without resorting to protein powder supplements. Combining protein sources will do this — so, for instance, eating wholemeal grains with legumes (think: rice or bulgar wheat with daal or vegetarian chilli). Quinoa, however, is a complete protein source and is also an excellent replacement for other grains. (If you are worried about the carbon footprint of your food, it is possible to buy quinoa that is grown in the UK.)

Iron
Whilst animal produce is typically a source of haem (blood) iron, non-haem iron (from plant sources) is available from leafy green vegetables. Unfortunately, the cartoon character Popeye was a bit misleading when it comes to spinach — it isn’t as high in iron as Popeye fans were led to believe — but it does contain some iron, as do kale and broccoli. Better non-haem sources of iron include legumes such as chickpeas, lentils and beans. Nuts and seeds such as cashew, almond, chia and pumpkin are also sources, as are some dried fruits or fortified foods.

One of the problems with iron, however, may not be so much how much you consume as how much your absorb. Taking your iron source with a source of vitamin C will help absorption; for instance, adding a bell pepper or some tomatoes to your leafy green salad. Avoiding tea (black or green) or coffee for about one hour either side of meals will also help absorption, as studies have shown that phenolic compounds in tea and coffee affect iron absorption. One study found that tea was associated with a 62 per cent reduction in non-haem iron absorption, and coffee was associated with a 35 per cent reduction in absorption. (Current research shows haem iron does not appear to be affected in the same way.)1,2 So before thinking of taking supplements, maximise your iron absorption by pairing it with vitamin C and — if you can — leaving a gap before having a cuppa.

Vitamins B12 and D
For anyone not eating any animal produce, B12 must be supplemented from a manmade source (see more about our B12 clinics here) — even if trying to avoid so-called artificial foods. Hider says she would ensure that her clients are supplementing B12 regularly and would also check their vitamin D levels. “I’m in Scotland so that goes for everyone!” she says.

We get B12 from meat and dairy; deficiency can lead to anaemia as well as a range of other symptoms including “a pale yellow tinge to your skin, a sore and red tongue (glossitis), mouth ulcers, pins and needles (paraesthesia), changes in the way that you walk and move around, disturbed vision, irritability, depression, changes in the way you think, feel and behave, and a decline in your mental abilities, such as memory, understanding and judgement.”3

Non-animal sources of B12 are fortified foods, yeast spreads such as Marmite, and nutritional yeast, which is used to add a cheesy flavour to foods.

“I recommend supplementing regularly,” says Hider. “…individual requirements do vary and in fact I would suggest that everyone over the age of 50 supplements — vegan or not.” This is because as we get older, our bodies become less efficient at absorbing B12.
Some nutritional yeasts are also fortified with vitamin D; otherwise look for vitamin D mushrooms — check the label because not all mushrooms are a source of vitamin D. (See p.33 for how supplements are made.)

Hider says she would also tell clients about the importance of including some algae-based essential fatty acids (EPA and DHA) in their diet.

Calcium
Although dairy is often considered the most important source for calcium, it is possible to get enough from a plant-based diet.

“People often ask about calcium but as long as they are eating plenty of green leafy vegetables, broccoli, almonds, tahini and calcium-set tofu, plus vitamin D… they should be fine,” says Hider. “Prunes are looking promising for support with bone health, and in fact the highest rates of osteoporosis are in those countries that consume the most dairy.”

However, Hider adds that her advice will depend upon the individual client. “Many are quite depleted, having spent decades eating a traditional Western diet,” she says.

Iodine
People who cut out dairy may need to consider other sources of iodine. Although a good source of iodine, dairy isn’t in fact a ‘natural’ source. Iodine is found in dairy because of the iodine used as disinfectant to wash cows’ udders, and from iodine fed to cattle; this is why until recently, organic milk was found to be lower in iodine than non-organic. Supplementation has since increased iodine content.

One good plant-based source of iodine is seaweed; however Hider says supplementation “is probably more reliable” than eating seaweed. “But if clients like sea vegetables I’m happy to encourage them to enjoy a small amount per week.” However, it is important to note that anybody taking medication for a thyroid problem should not increase their iodine intake without speaking to a GP.

One-a-day supplements
Other nutrients Hider might discuss with clients include taurine “…particularly where stress or anxiety are involved. It is found most abundantly in meat so supplementation can be helpful to provide therapeutic levels.

“It’s also worth thinking about choline, since eggs are a rich source of that — but tofu, quinoa and broccoli in the diet should cover it.

“I might also consider zinc and iron, depending on what the client has presented with.

“A good vegan multivitamin can be a good way to cover all the bases.”

Processed foods
These days if we don’t want to eat meat but crave bangers and mash, all we have to do is head to the freezer cabinet in the supermarket. But should we be worried about using processed foods?

“As with most things, it’s a question of balance,” says Hider. “Man-made protein sources covers everything from a [veggie] sausage to home-made tempeh. If someone is eating the odd veggie sausage with loads of vegetables and salad then I’m quite comfortable with that. If they are relying on highly-processed fake meats for every meal then that’s a different matter and I’d be encouraging them to use lentils and beans, mushrooms and good old quinoa instead.

Hider says that for most people, tofu and tempeh are excellent protein sources. “I probably eat a portion every day in some form,” she says. However, she adds that it does depend on the individual and whether, for example, there are thyroid issues (for which it may be best to avoid soya products) or any suspected intolerances.

Whilst it can be difficult to get a plant-based diet ‘right’, Hider points out that the same could be said for almost any diet.

“If it was straightforward then we’d [registered nutritional therapists] all be out of work and the NHS wouldn’t be reporting the astonishingly high costs of treating type 2 diabetes,” she says. “If I see clients with joint aches or skin issues then I might suggest upping the omega-3s. Unexplained fatigue might point to a need for increased iron or B12, and immune issues will always see me suggesting that we check vitamin D levels. Some people might also experience weight-loss or gain when they first make the transition [to a plant-based diet].”

Ultimately, she stresses, nutritional concerns and issues are not specific to plant-based diets. Everybody should consider good nutrition. “Ensure there is balance and variety with plenty of green vegetables and healthy fats, quality protein at every meal, try to reduce stress, take moderate exercise, address any sleep issues… keep ‘junk’ foods as occasional treats, stay hydrated.”